Why would a school keep a child molester employed and remove the child victim?

The most commonly asked question.

How could this happen?

Too many people stayed silent and agreed by their complacency to accept the situation.

What and where is Lawrence Academy? 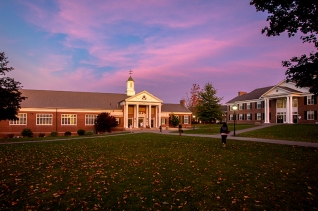 Lawrence Academy is an elite, college-preparatory high school in Groton, Massachusetts, 35 miles northwest of Boston. Founded in 1793, it enrolls about 400 students and has a current annual (one year) tuition of $62,550. It was ranked 43rd out of 50 New England boarding schools in 2018.

Who is Peter Regis?

Peter Regis, pictured here in 1995, the year he was allowed to stay on staff after reports of child sexual abuse had been documented. He is living and in his 60’s.

What happened to Steve Hahn?

Steven Hahn ended his tenure as headmaster in 2002, the year following the speech in the Lawrence Academy auditorium. He went on to become head of school at Portledge School in New York state. He is currently retired.

What about the other student, the friend?

The two former students remain very close friends. Though living on opposite sides of the country, they catch up at least twice a year and have a great valuing of one another.

Well, because the school asked, in their 2016 article in The Lowell Sun. On a more significant level, this is unfolding now because the reality has finally come into the light of awareness to be met by a wave of resistance like never before. If the truth could not be seen in the 1990’s, when the student was 16, 19, 20, 21, 22 or 23, it is bright and clear now.

Fun Fact:  Omnibus Lucet is the latin motto for Lawrence Academy, meaning, “The Light Shines for All”

How will this project move forward? What makes it unique?

Operating outside the legal system, the Amends Project will bring about positive change by the following tenets:

What am I contributing to by signing the petition or donating to the GoFundMe?

First, you are contributing to the strength of voices who are willing to speak up together for what is right. Signing sends a message that, when leaders attempt to cover up a crime against children, the choice is seen and called to account. It signifies a willingness to expect honesty, responsibility and accountability from those in whom we place our trust.

You also help confirm that there are many ways to achieve a goal – and moving forward on ethical grounds can, in fact, yield positive results.

Most importantly, your voice here supports the first pilot run of The Justice CORPS model for the 2019-2020 school year, putting the power to decide what happens after abuse back in the hands of youth and families. Current Lawrence Academy policies dictate, “The school determines whether the matter must be investigated…”. This new system directs sensitive information to a diverse group of strictly non-affiliated adults outside the school.

Justice CORPS members advise young people and their parents on their rights and options for moving forward. They communicate back to school officials. Students are also informed of their rights and reporting protocols at the beginning and middle of every school year. Schools lose points for incidents of abuse. Yet – if schools meet or exceed the recommended Guidelines for responding to abuse, schools may earn “recovery points”.

Justice CORPS rankings would then be available to prospective families. Parents deserve to know how well schools handle abuse and this system creates both transparency and protections.

What are the goals of the project?

1. to bring the truth to light.

Who is “the student”?

See: www.loveandtruthrising.org to learn more about the work of Vanessa Osage.

What is Restorative Justice?

An alternative to the judicial system, used independently or in conjunction with legal proceedings, Restorative Justice provides a human-centered approach to repairing harm. As a worldwide movement, it has been used effectively to address a range of cases for over 35 years. Please visit the Resources page for more information. Of special importance is Point One North, the work of Saroeum Phoung, who contributed to arranging the Restorative Justice Circle at Lawrence Academy on March 1, 2018.

Why is a new policy or system necessary?  Dan Scheibe says they have a similar communication system in place?

If the information stays within the school, then the problem just gets recycled. Similar to the internal investigation, when the school hires a firm or pays for a service they – as the consumer – have ultimate authority on what happens with that information. The chance to know and do nothing stays firmly in place.

This graphic may explain it best: 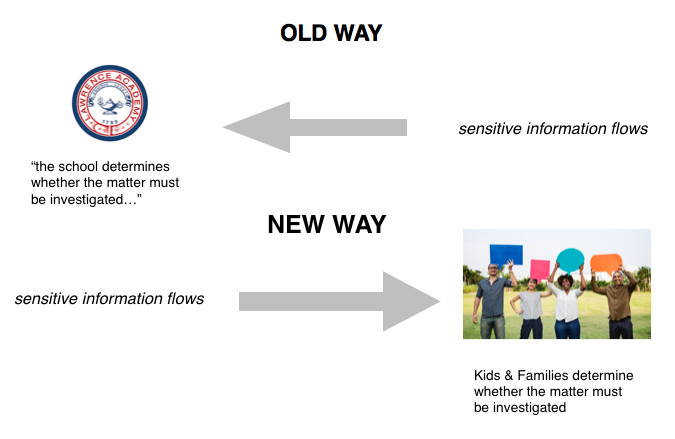 Tell us more about The Justice CORPS.

The Justice CORPS initiative has been proposed to Lawrence Academy as part of alternative resolution in July, October, November and December 2018. It was last updated on December 28, 2018. See the latest draft here: Justice CORPS Proposal 12.28.18

Leaders have been asked to hold an Open Door Board of Trustees Meeting on January 7, 2019 to discuss the opportunity. If you are interested in this chance to weigh in, please email Bruce MacNeil and let him know!  macneiltrustee@lacademy.edu

Who else needs to see this?